Enterprises can’t avoid hybrid cloud. Here are eight ways to get there.

As I explained in my previous post on Hybrid-multi Cloud, hybrid clouds are a given in any enterprise cloud scenario, at least as a transitional state. The reason is simple: you’re not going to find all your workloads magically removed from your data center one day - some applications will already be in the cloud while others are still on premise. And more likely than not, those two pieces will need to interact.

So, hybrid has some justification as a buzzword. Still, it can greatly benefit from applying architectural thinking to is. Let’s start with the definition from last time:

Hybrid cloud architectures split workloads across the cloud and on-premises environments. Generally, these workloads interact to do something useful.

I find simple definitions most useful because we already have to deal with enough complexity when trying to define a sound cloud computing strategy. Simple definitions not only make concepts and decisions accessible to a wide audience, they can also highlight what something is used for instead of focusing on what it’s made from (it may be a pattern author’s natural tendency to focus on intent as opposed to structure).

Alas, defining something is merely a first step – we’ll need to evolve it into something concrete so that it becomes actionable. For that, we take the Architect Elevator a few floors down to understand some important nuances and catalog them.

Having some workloads in the cloud while others remain on our premises sadly means that you have just added yet another computing environment to your existing portfolio. I haven’t met a CIO who’s looking for more complexity in his or her shop, so this doesn’t sounds like a great plan.

Therefore, unified management across the environment is essential to call something hybrid. Think of it in analogy to a hybrid car: The difficult part in making a hybrid car wasn’t to stick a battery and an electric motor into a petrol-powered car. Getting the two systems to work in a seamless and harmonious way were tricky, and that’s what made the Toyota Prius a hybrid.

So, we’ll amend our definition:

Hybrid cloud architectures split workloads across the cloud and on-premises environments. Generally, these workloads interact to do something useful. Both environments are managed in a unified way. 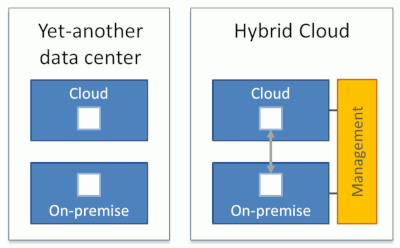 Uniform management across diverse environments isn’t easy, but can be approached in several ways:

Come to think of it, there’s plenty enough material just in those decisions to justify a separate post. So, let’s park this for a moment and go back to the fundamental decision of hybrid cloud: what goes out and what stay in?

The key architectural decision of hybrid cloud is how to split your workloads, i.e. which parts of your IT landscape to move into the cloud and which parts to keep on premises. This decision is closely related to the notion of finding seams in an IT system, first described (to my knowledge) by Mike Feathers in his classic book Working Effectively with Legacy Code. Seams are those places where a split doesn’t cross too many dependencies and doesn’t cause run-time problems, for example performance degradation.

I don’t think I’ll be able to quite come up with 31 ways to split workloads, so I apologize for the click-baity title. Still, I want to attempt to catalog as many of them as I can. It’ll be helpful in several ways:

I could think of at least eight common ways that enterprises split their workloads across their hybrid environments. You may have even seen more: 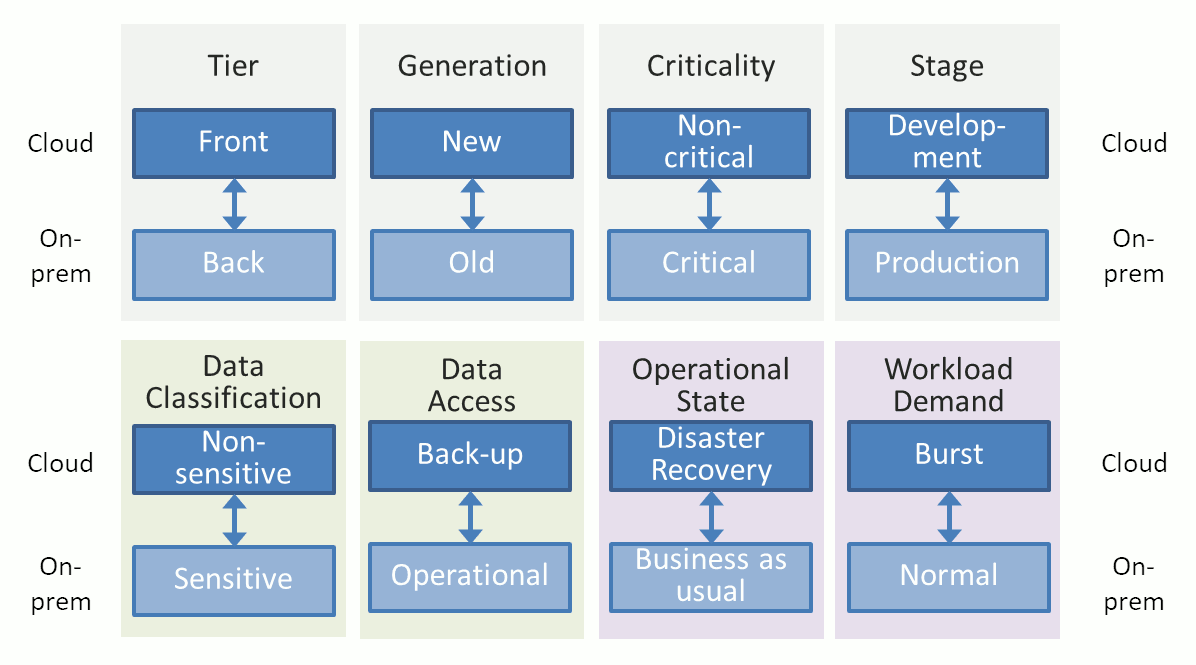 This list’s main purpose isn’t as much to find new options that no one has ever thought of. It’s much rather a collection of well-known options that makes for a useful sanity check. Let’s have a look at each approach in a bit more detail.

Tier: Front vs. Back 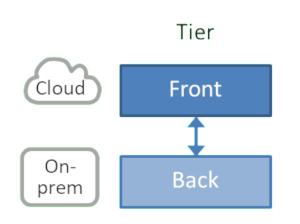 Moving customer or ecosystem-facing components, aka “front-end systems” / “systems of engagement” to the cloud while keeping back-end systems is a common strategy. While you won’t see me celebrating two-speed architectures, multiple factors make this approach a natural fit:

Besides these natural advantages, architecture wouldn’t be this interesting if there weren’t some things to watch out for:

As the excitement of “two speed IT” wore off, this approach can still be a good intermediary step. Just don’t confuse it for a long-term strategy. 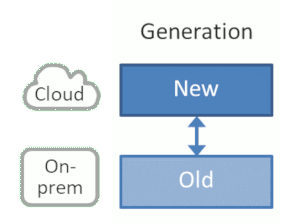 Closely related is the split by new vs. old. As explained above, newer systems are more likely to feel at home in the cloud because they are generally designed to be scalable and independently deployable. They’re also usually smaller, making them deserving of the label cloud native, even though it’s not my favorite term as it appears to prohibit cloud (im)migration.

Again, several reasons speak for this type of split:

Again, there are a few things to consider:

Overall this is a good approach if you are developing new systems - ultimately new will replace old. 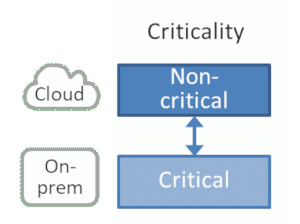 Many enterprises prefer to first dip their toe into the cloud water before going all out. They are likely to try the cloud with a few simple applications that can accommodate the initial learning curve and the inevitable mistakes. “Failing fast” and learning along the way makes sense:

While moving non-critical applications out to the cloud is a good start, it also has some limitations:

Overall it’s a good “tip your toe into the water” strategy that certainly beats a “let’s wait until all this settles” approach. 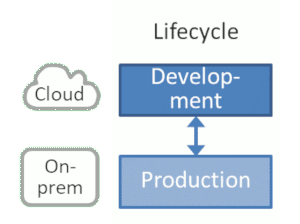 There are many ways to slice the proverbial elephant (eggplant for vegetarians like me). Rather than just considering splits across run-time components, a whole different approach is to split by application lifecycle. For example, you can run your tool chain, test, and staging environments in the cloud while keeping production on premises, e.g. due to regulatory constraints.

Shifting build and test environments into the cloud is a good idea for several reasons:

You might have guessed that architecture is the business of trade-offs, so once again we have a few things to watch out for:

This option may be most popular for development teams that are restrained from running production workloads in the cloud but still want to take as much advantage of it as possible. 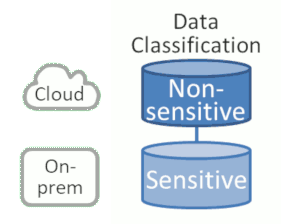 The compute aspect of hybrid cloud is comparatively simple because code can easily be re-deployed into different environments. Data is a different story: data largely resides in one place and needs to be migrated or synchronized if it’s meant to go somewhere else. If you move your compute and keep the data on premises, you’ll likely incur a heavy performance penalty. Therefore, it’s the data that often prevents the move to the cloud.

As data classification can be the hurdle for moving apps to the cloud, a natural split would be to move non-sensitive data to the cloud while keeping sensitive data on premises. Doing so has some distinct advantages:

However, the approach is rooted in assumptions that don’t necessarily hold true for today’s computing environments:

Hence, while this approach may be suitable to getting started in face of regulatory or policy constraints, use it with caution as a long-term strategy. 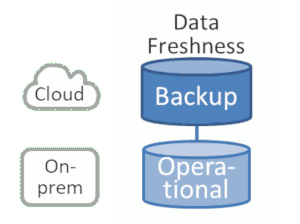 Not all your data is accessed by applications all the time. In fact, in many enterprises a vast majority of data is “cold”, meaning it’s accessed rarely. That’s the case for example for historical records or back-ups. Cloud providers offer appealing options for data that’s rarely accessed. Amazon’s Glacier was one of the earliest offerings to specifically target that use case while other providers have special tiers for their storage service, e.g. Azure Storage Archive Tier and GCP Coldline Cloud Storage .

Alas, it also has limitations:

Still, using cloud backup is a good way for enterprises to quickly start benefiting from the cloud. 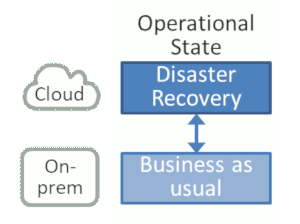 Lastly, one can split workloads by the nature of the system’s operational state. The most apparent division in operational state is whether things are going well (“business as usual”) or whether the main compute resources are unavailable (“disaster”). While you or your regulator may have a strong preference for running systems on premises, when these systems have become unavailable, it may be better to have a running system at all, even if it’s located in the cloud.

This approach to slicing workload is slightly different from the others as the same code would run in both environments, but under different circumstances:

However, life isn’t quite that simple:

So, this approach may be most suitable for compute tasks that don’t require a lot of data. For example, for an e-commerce site you could allow customers to place orders even if the main site is unavailable by picking from a (public) catalog and storing orders until the main system comes back up. It’ll like beat a cute 404 or 500 page. 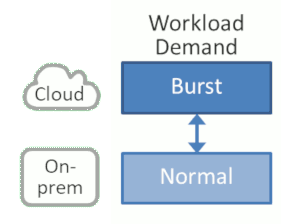 Last, but not least, we may not have to conjure an outright emergency to occasionally shift some workloads into the cloud while keeping it on premise under normal circumstances. An approach that used to be frequently cited is bursting into the cloud, meaning you keep a fixed capacity on premises and temporarily extend into the cloud when additional capacity is needed.

Again, you gain some desirable benefits:

But there’s reasons that people don’t talk about this option quite as much anymore:

This option likely works best for compute-intensive workloads, e.g. simulations. It’s also a great fit for one-time compute tasks where you rig up machinery in the cloud just for one time. For example, this worked very well for the New York Times digitizing 6 million photos or for calculating pi to 31 trillion digits.

Putting it into Practice

For most enterprises hybrid cloud is inevitable, so you better have a good plan for how to make the best use of it. Because there are quite a few options to slice your workloads across the cloud and your on-premises compute environments, cataloging these options helps you make well-thought-out and clearly communicated decisions. It also keeps you from wanting to proclaim that “one size fits all” – all aspects of being a better architect.

ps: if you haven’t seen it yet, have a look at Simon Wardley’s humorous take on hybrid cloud

NOTE: As a devout vegetarian, I certify that no elephants were harmed in the production of this article nor any related cloud migrations.