By now you are likely aware that I like to draw analogies between real life or popular culture and IT architecture. After all, every time I visit a coffee shop I can’t help but think about transaction scopes and The Software Architect Elevator contains more than a few references to The Matrix movie trilogy. Likewise, Ben Affleck provided us with valuable transformation guidance that evolved into a chapter of Cloud Strategy. 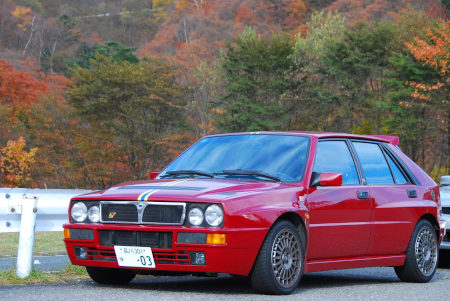 Let’s broaden the scope a bit and examine what we can learn from international popular culture. Having lived in Japan for several years, I got a pretty broad dosage of various culture tidbits, including buying electronic components in Akihabara, renting model railroad tracks to run favorite train sets, acquiring a Hello Kitty figure hand-carved from granite, making a high-speed run across the shutoko, and taking my Integrale for a mediocre lap up and down Nikko’s Irohazaka (see picture). The last two give a hint that I am also fond of car metaphors like burning the clutch when failing to properly shift gears during a transformation.

When geeks think about Japan, one item that routinely springs to mind is anime, Japanese animation, which isn’t anything like a cartoon but essentially a motion picture that’s (hand or computer) drawn instead of filmed. Putting two and two together, you get car anime. Within that sub-genre, a very popular series has been Initial D, having immortalized drifting and mountain “battles” between street racing teams (here a short sample for the uninitiated). They also race on the Irohazaka—much faster than I did.

The story’s key character is Takumi, an amateur driver who draws the attention of a local racing team, the Akagi RedSuns. He is driving a “sleeper” car, an old Toyota AE86, which is a lot faster than it looks, especially in the hands of Takumi who learned how to drift when delivering tofu for his dad’s business (it also got upgraded to a nifty race engine).

Despite being a skilled driver, Takumi doesn’t know much about car and engine mechanics. That’s why Ryosuke, the RedSun’s leader and instigator of “Project D”, coaches him to get to the next level. Before critical races, Ryosuke provides Takumi, as well as his younger brother Ryosuke, with somewhat cryptic advice about the car’s technical details. For example, in one episode Ryosuke reminds Takumi that his AE86’s redline is higher than that of the opponent’s car. Likewise, he hints Keisuke, who competes with his FD3S against an identical model, that he has a twin turbo whereas his opponent Kyoko converted to a single large turbo charger. The drivers then decipher the advice and translate it into an actionable strategy that they use to defeat their opponent.

I have found IT to be quite similar: you can do pretty well by using IT as a tool, giving input and basing your decisions based on how the system behaves in return. However, great success usually comes from having a clear strategy that leverages specific technology capabilities, not from merely setting ambitious goals and assigning budgets. I had stated before that you can’t manage what you can’t understand and it’s never been more true than in today’s amazingly powerful but also terrifyingly complex technology landscape.

The lesson here isn’t that every IT manager or architect needs to know every detail of the IT engine room or be the best coder. Rather, it’s about being able to translate technical details into a winning strategy. That’s why I have stated that:

For example, it’s not enough to just rattle off buzzwords and state that serverless is somehow better than containers, which are somehow better than VMs. Understanding serverless technologies as a new form of runtime that can scale down to zero to avoid standby cost (when there’s no traffic) is a step ahead. Once you realize that a serverless ecosystem combined with cloud automation enables a new way of architecting and deploying highly available and scalable solutions, you can start to develop a new strategy. Indeed, that’s riding the Architect Elevator in action.

So how did Takumi and Keisuke translate technical knowledge into a winning strategy? After installing a better tachometer, Takumi realizes that his engine gains the most power at very high rpms, the true redline being 11,000. More importantly, he learns to use this wider rev band to avoid a shift point on the short straight ways between switchbacks, giving him a critical advantage.

In the battle between the two FD3S, Kyoko, who is in the lead, makes a minor mistake and has to briefly let off the throttle. Keisuke recalls his brother’s advice and concludes that Kyoko’s single big turbo provides massive acceleration but takes longer to spool up from idle. In a less-than-noble move, he slightly bumps Kyoko’s car in a subsequent turn, forcing her to let off the throttle again and using the inevitable lag to pass her.

In IT and mountain racing alike, the winning move rarely results from a single property. Both are complex systems with a delicate interplay between components. Rattling off buzzwords like “serverless” or “turbocharger” won’t do you much good and even focusing on a single component in depth is bound to only deliver marginal results. The real advantage appears when one understands the interactions between the pieces and can translate that into a specific action that exploits the components’ characteristics.

Who would have thought that watching car anime helps you in your IT career!

Architecting your organization to do architecture with or without architects.